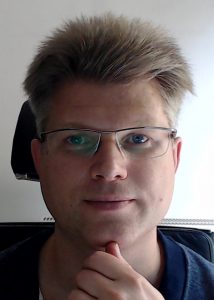 Tino Lourens (1970) studied computing science at the university of Groningen (1988-1993), meanwhile developing his first serious salary administration program. At the same university he completed his PhD (1993-1997) in the field of image processing and object recognition. During this period he got acquainted with graphical programming tools AVS and early 1997 with Khoros. Graphical programming tools where excellent for integration of different software components and stimulated a modular construction.

From 1998 he was appointed as a scientist at different governmental institutions and companies in three different countries (Japan 7 years; Belgium 0.5 years; Netherlands currently). Over this period he has published on average 5 papers a year, got familiar with many aspects of image (either, color, monochrome, thermal, radar, or Xray) processing and controlling robots. His research involved creation of computational models inspired by neuroscience, computationally attractive mathematical models, and computer vision.

He came to realize that one of the key aspects of being able to conduct research successfully was by having the appropriate software tools and libraries, since a decent amount of time was spent producing the appropriate software.  Over the past decade over 1,000,000 lines of C++ have been produced. A tool to easily integrate modules and conduct tests by connecting these modules was its result. TiViPE was created. It stands for Ti-no’s Vi-sual P-rogramming E-nvironment and is pronounced as TeeVeePee.

If the average programmer can produce around 10 lines of code per day, what is the secret of a scientist scribbling 200 a day? The answer is simple: “keep it simple” and “hide complexity”. No one doubts if a computer user is able to write 2 to 3 pages (200 lines) of text during a day. Programming is nothing else than expressing yourself in a certain (computer) language.